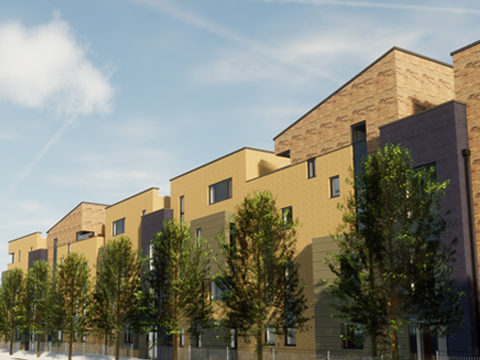 Galliford Try Partnerships has started work on a £20m development on Edge Lane, Liverpool, after being chosen by Liverpool Mutual Homes to deliver 145 houses and apartments.

The project includes a mix of homes, with 107 one and two-bed apartments set in three and four-storey blocks fronting Edge Lane.

Facing Royton Street, there will be also 38 two and three-bed homes. These will be available for shared ownership while the flats are earmarked for rent-to-buy.

Plans were approved for the project in November last year, with the developer making a £145,000 provision for off-site open space, and Galliford Try has now started work on site with anticipated completion set for 2020.

The Edge Lane project forms part of Liverpool Mutual Homes’ plan to build 1,500 new houses across the city region. Other projects in the housing association’s pipeline include a 180-home mixed extra care scheme in Kirkby, which is being brought forward in partnership with Lane End.

Brendan Blythe, regional managing director at Galliford Try Partnerships said: “The Edge Lane development will see a high-profile area within Liverpool transformed  as well as the delivery of much needed affordable housing for sale in a commutable area to the city centre.

“The scheme has been designed with residents in mind and will excellent provide amenities and parking provisions in addition to good transport links in and out of Liverpool.”

© 2022 Bowker Sadler Architecture | Call : +44 (0) 161 406 7333 | website by numagoo
We use cookies on our website to give you the most relevant experience by remembering your preferences and repeat visits. By clicking “Accept”, you consent to the use of ALL the cookies.
Cookie SettingsAccept AllReject All
Manage consent

This website uses cookies to improve your experience while you navigate through the website. Out of these, the cookies that are categorized as necessary are stored on your browser as they are essential for the working of basic functionalities of the website. We also use third-party cookies that help us analyze and understand how you use this website. These cookies will be stored in your browser only with your consent. You also have the option to opt-out of these cookies. But opting out of some of these cookies may affect your browsing experience.
Necessary Always Enabled
Necessary cookies are absolutely essential for the website to function properly. These cookies ensure basic functionalities and security features of the website, anonymously.
Functional
Functional cookies help to perform certain functionalities like sharing the content of the website on social media platforms, collect feedbacks, and other third-party features.
Performance
Performance cookies are used to understand and analyze the key performance indexes of the website which helps in delivering a better user experience for the visitors.
Analytics
Analytical cookies are used to understand how visitors interact with the website. These cookies help provide information on metrics the number of visitors, bounce rate, traffic source, etc.
Advertisement
Advertisement cookies are used to provide visitors with relevant ads and marketing campaigns. These cookies track visitors across websites and collect information to provide customized ads.
Others
Other uncategorized cookies are those that are being analyzed and have not been classified into a category as yet.
SAVE & ACCEPT
Powered by